For many of us, choosing a vacation destination involves careful research and taking into consideration tens of factors before we make a decision. Yet, if you are a big movie buff, some choices are easy. In that case you may unlikely pass on an opportunity to visit one, several or all of the key Caribbean settings where famous Hollywood productions were filmed. If you do, in fact, have the time and money to explore some of the famous Caribbean movie settings, below is a list of 10 classic productions that were filmed in the region together with the exact locations, which you can see in the movies (the order is somewhat arbitrary starting with our favourite movies first):

There is a famous scene in the movie when buffed Daniel Craig steps out of an ocean water after a swim. This scene was filmed at Ocean Club hotel on Paradise Island in The Bahamas, where James Bond was said to stayed at villa 1085. Interestingly, another agent 007 stayed at villa 1085 in the same hotel. In Never Say Never Again from 1983, James Bond played by Sean Connery also visits the Bahamas to meet with Largo, an agent of SPECTRE and stays at Ocean Club. In fact, two other Bond movies with Sean Connery were filmed in the Caribbean. These are Dr. No, which was filmed in Kingston, Jamaica, as well as Thunderball, which has many scenes taking place in the Bahamas.

Anyone who watched the movie will remember the shots from first half of the movie taken at the Arecibo Observatory, where Judy Foster and Matthew McConaughey meet for the first time. The observatory plays itself in the movie as a location where the SETI program,  aimed at finding radio signals of alien civilizations, has been running for many decades. The telescope is located near Bosque Estatal De Río Abajo in Puerto Rico is the second largest radio telescope in the world (though it was the biggest in 1997) and is accessible to visitors all year round.

Considering that 99% of the movie takes place in a jail, you may wonder how it gets to be on this list. Well, it is the last 30 seconds of the movie that take you to the Caribbean. This is when Andy and Red meet again after they both, in different ways, get out of the Shawshank State Penitentiary and meet on a beach in Mexico (according to the storyline). However, this scene was actually recorded at Sandy Point on the island of St. Croix in US Virgin Islands. Therefore, if you would like to check out how Andy and Red are enjoying their sunny retirement, this is where you may want to go.

Action of the original movie takes place on Isla Nublar, a fictional island off the coast of Costa Rica. Although Hawaii was the intended location for most of the actual filming, a hurricane that hit it mean that some of the scenes had to be shoot in the Caribbean. One of the locations was Chavon River in the Dominican Republic. The choice was not completely accidental. Chavon River served as a filming location for another Hollywood production couple decades earlier – Apocalypse Now starring Marlon Brando and Martin Sheen.

There are many beautiful scenes in the movie showing Havana and its life in late 1950s. However, what you may not know is that none of the scenes were actually filmed in Cuba. American embargo on the island meant that the filming crew had to pick another location to get the scenes they needed. They settled for Caso de Campo in Dominican Republic, where a large set was built including several Havana-like looking streets. Some of the indoor of scenes of Michael Corleone’s visit to Cuba were also filmed in the capital of Dominican Republic, Santo Domingo.

The Curious Case of Benjamin Button (2008)

An intimate love scene between Brad Pitt and Cate Blanchet, the two main characters in the movie, was filmed on Water Island of St. Thomas in US Virgin Islands. The scene, although only lasts for a couple seconds, is a great advertisement for the USVI as it truly showcases the region’s beauty and tranquillity. Unfortunately, the Honeymoon Beach where the action takes place is never as empty as it appears in the movie and you may never actually get a chance to be there just by yourself.

There are so many scenes from the Caribbean in not just the first one, but in all of the Pirates of the Caribbean movie series that it would be difficult to list them all. The most important locations where filming took place include: San Juan in Puerto Rico, Vieille Case in Dominica, Tobaco Cays and Wallilabou Bay in Saint Vincent and the Grenadines, Tortuga in Haiti, Exumas in the Bahamas as well as Samana in the Dominican Republic. Indeed, each of the five movies features scenes that were made in the Caribbean and it shouldn’t have been any other way consider the title and the topic.

In the 2006 movie based on the famed TV series, police detectives Crocket and Tubbs are constantly on the move. In the movie they end up in several countries and most shots for these scenes were made in Uruguay. However, a couple of them were filmed in old town of Santo Domino as well as in the coastal waters  of the Dominican Republic. The movie also has a great sounding Cuban music dancing scene, though it wasn’t filmed in Cuba.

In the first movie of the saga, Bella (Kristen Stewart) and Edward (Robert Pattison) get to go on a beautiful honeymoon with a stunning beach they spend much time on. This is, in fact, Magens Bay Beach on St. Thomas, USVI. In the movie you get to see not just the beach, but some of the other parts of Virgin Islands. It’s a shame the characters don’t get to come back to this setting in any of the following movies!

In this fast action sequel starring Sandra Bullock and Keanu Reeves, a large cruise ship crashes into a Caribbean port town. The impressive scene was actually filmed in Saint Martin, where a $5 million, 35-building set was constructed in the capital town of Marigot. “This mockup, referred to as the “rail ship”,[48] weighed 300 short tons (270 t), and sat atop a set of wheels along a 1,000-foot long (300 m) track built 60 feet (18 m) underwater.“ 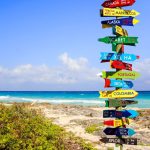 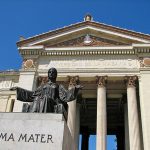