Haiti isn’t the first place that springs to mind when you imagine a Caribbean getaway, but it might end up being one of the most memorable trips you make to the region. Best of its hidden gems is a UNESCO-listed pair: a hilltop fortress and a Royal palace. Unlike in other parts of the region, these are historic sites that you’re likely to have almost to yourself, particularly if you’re an early riser.

A fortress on a hill

To reach the fortress, called Citadelle Laferrière, you’ll first need to have a decent level of fitness or rent a horse for the kilometre and a half ride up. The process is highly organised, but while you wait for a horse to be allocated you can allow yourself a smile at their names, the likes of Suzuki and Ferrari. These horses do anything but live up to their names, but with scenery this good, who’d want to hurry?

The path leading from the horse corral gives way to lush thickets of bananas and finally, the scrubby vegetation of the summit. The fortress occupies a lofty position atop the rocky outcrop Pic Laferrière. Approaching from below, you first see a towering, sheer wall of stone, giving visitors the not unreasonable impression that this is an impenetrable pile. This forbidding structure with its terrifyingly solid bastion took shape under a man named Jean-Jacques Dessalines.

A place fit for a king

Construction had begun on the fortress in 1804, a symbol of the trailblazing black republic that had declared independence that same year. Dessalines died in 1806, leaving the grandly titled Roi Henri Christophe, a former slave who had crowned himself king of northern Haiti, to finish the job. A workforce of 20,000 men built walls four metres thick and forty metres high, able to repel any invading army.  Its reputation meant that none had ever tried.

Low cloud often suffocates the landscape up here, swaddling the hilltops in a tightly wrapped blanket that drains the richly coloured landscape to a dull grey. The jovial exhilaration of the ride up will soon evaporate as guides plunge into dark tales of dungeons and untimely deaths. An incongruous white tomb was the final resting place of Christophe’s brother-in-law Prince Noel, killed in 1818 when the powder magazine exploded. Dictatorial Christophe was buried up here too. He committed suicide following the double blow of a paralysing stroke and a rebellion from the subjects he had treated so shamefully. I’ll leave you to decide whether you think it served him right.

Visitors often combine the fortress with another historic site, the ruin of Sans-Souci Palace, just five kilometres away. Christophe built it between 1810 and 1813. It would be a Royal residence, a magnificent palace befitting the status he had bestowed upon himself – in all he constructed nine palaces and fifteen chateaux. Such extravagance was intentional; Christophe wanted to prove that a nation led by a free black man could be as successful as the countries of Europe that he emulated.

Today, Sans-Souci is a mere shell, the abandoned structure devastated by an earthquake that hit this part of Haiti in 1842. Even in its present state, the grandiose proportions make it easy to imagine how splendid it would have been and how suited to the lavish parties and functions a king would have hosted. On the scruffy lawn in what would have once been elaborate formal gardens, styled as a Caribbean Versailles, you’ll find souvenir sellers hawking their artwork and handicrafts. It doesn’t feel Royal at all, but there’s a definite charm to the place that’s hard to ignore. 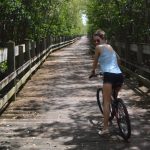 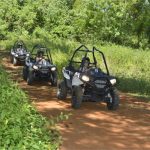