Not every tale is a fairy tale. With slavery in full swing, the 18th century Jamaica was not a particularly friendly place of romance for the largely black and enslaved population. Despite the beauty of the island, life here was hard. Like in many other places in the Caribbean, slave owners/masters, treated their slaves like animals rather than people and often traded, abused or even killed them without a particular reason. However, there were also instances when slave owners would get infatuated with one of their slaves and would treat them better or just different to all other slaves.

Such was the case with Richard Chardley, an 18th century owner of the Yardley Chase Plantation who fell in love with a beautiful slave girl called Mizzy. In his passion for Mizzy, Chardley would punish and even kill male slaves who showed interest in her. The stories of his infatuation with Mizzy quickly spread among other slave owners as he refused to sell her to other plantation owners, even for an very high price. However, even though Chardley owned Mizzy, he could not control her feelings and despite his best efforts to convince her to himself, she instead fell in love with another slave on the Yardley Chase Planation called Tunkey.

Chardley quickly found out about the love between the two slaves and decided to separate them by selling Tunkey to another plantation owner and slave master. When the two lovers found out about Chardley’s plan, they decided to run away together. Their escape was quickly discovered, however, and Chardley was livid. He organized an armed pursuit with a goal to retrieve Mizzy and kill Tunkey. Despite their best efforts, the lovers were eventually chased to an edge of a cliff 1,700 above the sea level and faced the ultimate choice – to have Chardley decide their faith or to jump together to their deaths. The name of the place where Chardley found Mizzy and Tunkey in Jamaica’s Saint Elizabeth Parish tells you what decision the two lovers decided to make – it’s called Lovers Leap.

Today, this location of tragic history serves as a beautiful lookout into the Caribbean Sea and a place of relaxation as well as good food and drinks. Lover’s Leap is open all year round from 9am to 5pm and what you can find here is an expensive restaurant serving Jamaican dishes and cocktails, a modern lighthouse and a gazebo overlooking the sea as well as a four mile trail that leads to a to a rocky beach. You can also take pictures with a popular statue of Mizzy and Tunkey and of course take let’s of pics with the stunning views out into the water. Importantly, you can drive here relatively easily and there is a spacious parking area available next to the restaurant.

In truth, Lover’s Leap is a must on a visit to Jamaican southern coast. The rich history of the place combined with spectacular sights as well as including a great place to eat (a whole meal for $5!) makes this location a perfect day trip from your hotel. And, as you stand at the edge of the lookout looking down at the rocks and sea below, you can contemplate the two lovers facing the life or death decision and the choice they ultimately made – that of freedom. 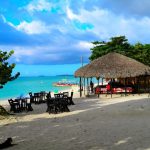 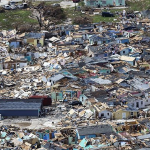