There is lots to do in San Juan, Puerto Rico. From sightseeing the old town with its stunning architecture to going out dancing in Condado until early morning hours, there is so much to take in that it is impossible to ever get bored here. However, there is one attraction and adventure to do just outside San Juan that you must put at the top of your Puerto list and that is a visit to Piñones and cycling around it. Why, you may ask? Well, imagine a peaceful boardwalk that is 7 miles long and runs along many stunning beaches, an untouched mangrove forest and wetlands plus tens of delicious local food stands. Furthermore, you can explore this boardwalk any day of the week by walking or cycling and, despite it being very close to San Juan, you won’t find huge crowds here.

Reserva Natural Bosque de Piñones is a natural preserve located just a few miles away from San Juan that contains tens of square miles of a mangrove forest and is easily accessible to the public by walking or cycling. The name Piñones itself comes “Piñón pine”, which is a type of a tree that can be found in many southern parts of North America and it grows eatable nuts that have been part of diets for Native Americans for hundreds of years. The protected area of Piñones includes not only the forest, but also several islands and lagoons and it attaches into the longest stretch of continued and still undeveloped beach in Puerto Rico. What is more, beyond the natural preserve the area of Piñones also contains several truly local villages and a very unique “outdoor food court” with tens of food kiosks lining up over several miles of Piñones boardwalk.

What makes this small part of Puerto Rico even more interesting is its recent history. In fact, had certain real estate investors had it their way in late 1990s and early 2000s, Piñones would today be a fully gated apartment community with over 1,000 condos, a large casino, a shopping mall and a large stretch of beach closed off to the general public. However, as soon the local population had found out about the development plans, they mounted a heavy resistance (through a community organization they formed called Corporación Piñones Se Integra) that would go on for several years and through several court instances. At the end, the courts agreed that a huge development in the mangroves of Piñones would not only be at a constant risk of flooding and evacuation due to storms, it would destroy the delicate habitats of tens of native and endangered species like the Brown Pelican as well as put at risk over a hundred of archaeological sites of indigenous populations that lived here before the arrival of Christopher Columbus.

How to get there?

Getting to the area of Piñones is very straightforward. In fact, if you drive, you can get here from downtown San Juan in about 15 minutes (or only 10 minutes from Condado). Even better, you can drive here from the airport in as little as 5 minutes! All you have to do is to get on route PR-187 that runs parallel to the airport and it will take you straight to several locations, from which you can explore the natural reserve or the long stretch of beach. When it comes to parking, your best bets are the free parking lot next to the building of Corporacion Piñones Se Integra (COPI) or a large parking area along PR-187 by La Posita beach. However, there are quite a lot other small parking lots here or you can just park along the road and feel pretty sure you will not get a ticket.

Since it’s so close to San Juan, you can also get to Piñones cheaply with a taxi (keep in mind Uber is still mostly inaccessible in Puerto Rico) or even a bus (route D45 starts on Highway 26 and goes to Piñones every hour. One thing that you may not easily be able to do is to get a room and stay in Piñones overnight. Of course, the reason is simple and described above already – this neighborhood is still undeveloped and it still doesn’t have many places. Yet, you can definitely check out one of the several guest houses lining up Aviones Beach including Casa Kuka, Coastal BnB and The Beach Club Guest House.

One of the most thrilling aspects of Pinones is its 7 mile long boardwalk called Paseo Tablado de Piñones that starts at Corporación Piñones Se Integra, goes along the rocky coast, beautiful sandy beaches, large pars of the mangrove forest as well as through the quintessentially Puerto Rican village of Finca Piñones. Although the boardwalk did sustain some damage during hurricane Maria, it has been mostly repaired and can currently be explored by walking or renting a bicycle from COPI. Since the boardwalk is very long, getting a bike is actually your best bet to get the most out of the experience. The cost of a rental is $10 per bicycle per hour, which comes with a helmet. COPI is opened from 9am to 5pm every day though you won’t be able to rent equipment after 4pm. Keep in mind, COPI is located right on the water of lake Laguna La Torrecilla and so besides bikes they offer kayak rentals as well, which are also $10 per hour.

Still, our first choice is a bicycle as the sights and experiences along the boardwalk are truly spectacular! First, as you leave the COPI building you will take a turn under a bridge of PR-187 that will put you in a superb spot overlooking Condado and Old San Juan far in the distance. As you keep riding you will soon smell various spices and meats of food kiosks lining up the Punta Cangrejos peninsula. As you keep going you will arrive to Aviones Beach, a beautiful lagoon with calm waters and a relaxed atmosphere. Here too you will find quite a few food and drink spots that are sure to draw you in with their smells and music. Further along the boardwalk arrives to the locally popular beach spot of La Posita, which actually looks and feels like a giant swimming pool. Once you take a dive here, you can take a turn into the forest after first passing several houses of La Torre village. From here you have several beautiful miles of forest to explore after which the boardwalk will turn again into a road that will take you through Finca Piñones and back to the beach, from which you can head back to where you started from.

I have already mentioned the fun beach spot of La Posita as well as Aviones Beach, but Piñones is actually made up of several of differently names beaches that together make up almost six miles of the longest continuous stretch of sand in all of Puerto Rico. And, the beauty of these beaches is that you can simply park anywhere along PR-187 and walk over less than 50 feet to enter a quiet spot that you can have completely to yourself. Besides La Posita, our other favorite location is Playa Vacia Talega, which you will find towards the end of the 6 miles that make up Piñones beach. The beautiful lagoon of Vacia Talega is full of romance and doesn’t get very busy. Also, the water here is always calm.

Besides Piñones itself, as you drive here from San Juan or travel back there, you will be passing one of the most popular beaches in the area – Carolina beach. Super kids friendly, this beach is wide, has all the needed amenities and offers good amount of shade. The water is shallow and very rarely gets rough. However, this is a place you could also consider a party beach. Lots of locals come here on the weekends and you can expect to encounter lots of loud music and partying going on here on Saturdays and Sundays. Of course, if partying is not your thing, than just pass Carolina beach on your way to Piñones where you are sure to find plenty of serenity and peacefulness. One way or the other, be sure to make Piñones part of your next trip to Puerto Rico and do let us know what you think of it! 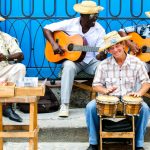