The Dominican Republic earns fame for its white-sand beaches, turquoise waters, and adventurous activities. But when visiting the Dominican Republic, you shouldn’t skip its most historic destinations. The Caribbean nation holds the first European settlements of the New World and has tons of iconic landmarks across its beautiful cities.

As the first European settlement of the New World, Santo Domingo is the historic heartbeat of the Dominican Republic. Christopher Columbus founded Zona Colonial in 1498, and the district earned status as a UNESCO World Heritage Site. Zona Colonial contains many of Santo Domingo’s most treasured landmarks that showcase the city’s resounding history.

When you step foot into the colonial district, it feels like you’ve entered a time portal into the 16th century. Parque Colón features a statue of Christopher Columbus and boasts a vibrant atmosphere of buskers and vendors. Around the corner, Basilica Cathedral of Santa María la Menor is the oldest cathedral in the Americas, and the medieval Fortaleza Ozama offers scenic views of the river.

The Museum of the Royal Houses was for important Spanish government officials, but the 16th-century structure now displays Taino and colonial artifacts. One of the most elegant buildings in Santo Domingo, the 18th century Pantheon of the Fatherland is a mausoleum for key figures in the Dominican Republic.

Alcázar de Colón boasts exquisite Mudéjar architecture and holds extravagant pieces of European Renaissance artwork. Although it’s in crumbling ruins today, Monasterio de San Francisco remains a religious symbol as the first monastery of the New World. If you need time off your feet but still want to check out all the historic sites of Santo Domingo, the Chu Chu Colonial escorts you around the colorful Zona Colonial.

While often overshadowed by Santo Domingo, Santiago De Los Caballeros is among the most underrated places to visit in the Dominican Republic. It’s the second-largest city in the Dominican Republic, and the star attraction is the grandiose Monument to the Heroes of the Restoration. The hilltop monument presents spectacular views of Santiago and honors those who fought in the War of Restoration against the Spanish.

The 230-ft memorial is a reminder of the brave souls who fought for the independence of the Caribbean nation. Statues and exhibits present facts about the War of Restoration, and the iconic structure lights up at night. The nearby Fortaleza San Luis witnessed several strategic battles and is now a museum with interesting sculptures and artwork.

Most tourists flock to Puerto Plata for the beaches, but the Atlantic coast town has a rich colonial history. The Fortress of San Felipe was instrumental for the Spanish to defend the coast against invaders. Pirates and colonists from other European countries searched for gold and silver, and San Felipe helped deter enemies. The fortress witnessed many of the most strategic battles in the Dominican Republic and remains the only structure from colonial Puerto Plata.

After serving as a vital Caribbean fort for hundreds of years, San Felipe had a darker history as an infamous prison. The fortress housed captives during the War of Restoration and the dictatorship of Rafael Trujillo. Eventually, San Felipe would become a museum that stores military weapons and artifacts from the colonial age.

All it took was five days exploring the otherworldly landscapes of Iceland to ignite Daniel’s adventurous spirit. The travel bug firmly placed its grip, and a career change was on the horizon! Determined to leave his job in New York City behind and spend a life on the road and the sky, Daniel set his sights on every beautiful destination imaginable.

Turn the page nearly three years later, and he has trekked the Swiss Alps, soaked in the crystal-clear waters of Greece, sailed the archipelagos of Sweden, and wandered the Andes Mountains. After starting a newfound career as a freelance travel writer, his desire to discover the world's beauty has only intensified.

Daniel’s passion for traveling stretches farther than just witnessing breathtaking scenery and going on intrepid hikes. The chance to meet hospitable locals, taste delicious cuisine, and care for adorable pets abroad are memories he holds dear to his heart. His mission is to inspire the explorer inside every soul by capturing astonishing landscapes, energetic city streets, and unrivaled cultures. 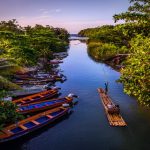