By 1751, tensions between the Britain’s North American Colonies and the British Empire were already rising. Georgia, the last of the thirteen English settlements would be established within the year, and Benjamin Franklin would be discovering electricity soon. If it wasn’t for the aggressions between Britain and France, that eventually erupted into the Seven Years War, perhaps the American Revolution would have begun twenty years earlier. But it didn’t. While the European superpowers were focused on fighting each other, the colonies went unnoticed for a few decades, that allowed a young man, nineteen-years of age, to take a simple trip which turned out to be of great historical significance.

When George Washington’s brother contracted tuberculosis, he was advised by his doctors to leave the rainy Virginia climate behind for warmer weather down south. It was the only time America’s first President travelled outside of the United States, but it left an impression on the young man that helped change the course of the Revolution.

Despite minimal schooling, Washington had learned enough about draftsmanship and map-making, that he was appointed surveyor of Culpeper County by the time he was eighteen years-old. While this familiarized him with the Western Frontier, it was Barbados that would inspire his military career.

The brothers stayed with Lawrence’s uncle-in-law in an impressive house located in Bridgetown on the southwest coast of the island. Left with little to do while Lawrence convalesced, George explored all the island had to offer, which was quite a lot at that point in time. In addition to the extreme wealth Barbados had accumulated as the world’s leading sugar manufacturer, it was a technologically advanced metropolis that made Washington’s Virginia look like a rustic fishing village in comparison. But before he could do the majority of his sightseeing, he contracted cowpox, a milder version of smallpox. One might assume the military fortresses, sugar plantation machinery, and unique culture would have the biggest impact on the young man, but it was surviving the disease and discovering inoculation that later ensured victory for the American colonies.

During the height of the Revolution, smallpox descended upon American forces with devastating effects. It was responsible for killing more Soldiers than bullets and cannon fire combined. Washington appealed to congress to inoculate the entire militia, but Congress forbade it, fearing it would weaken the entire army all at once. Washington ignored the order, however, and saved an estimated fifty to seventy percent of his troops from perishing from the disease. But it wasn’t just his near-death experience that made his trip to Barbados unforgettable. And luckily, you don’t have to contract smallpox to enjoy the island the way Washington did.

The house, built in 1717, stands in near perfect condition. It is not only home to a museum, but still a location of great political significance. Distinguished visitors include Queen Victoria, Queen Elizabeth, Prince Harry, and President Clinton, to name a few.

Because of its great wealth, Barbados was fiercely guarded by the British, who were worried about losing the island to invaders or pirates. Taking no chances, England fortified its coastlines with forty-two forts and four-hundred and sixty-three cannons. Thoroughly impressed with Barbados’ military prowess, and still dealing with the passing of his brother Lawrence, who served as a Captain in the Army, Washington changed careers from a surveyor to a Soldier.

Many of Barbados’ fortresses are still intact and open to the public for tours, including the ramparts of Fort Ann with dozens of pristine cannons, a changing of the guard ceremony every Thursday afternoon, and close to two miles of recently discovered tunnels that connect the Garrison house to Washington’s house.

Without question, however, of the most spectacular offerings of Barbados is the opportunity to eat dinner in the house where Washington stayed. Every Monday, from February 11th until April 1st, twenty-nine guests can enjoy an authentic meal with an historian who plays the role of an elder George Washington as he reminisces about his visit to the island. With only candles lighting the room, reenactment actors will serve you dishes such as split pea and eddo soup, lamb stew, yam pie with plantains, pineapple and rumbullion’d bread and pudding as a string quartet plays in the corner.

In addition to the buildings, fortresses and structures that marked Washington’s time in Barbados, he also spent a great deal of time exploring the island’s natural beauty from horseback. In one of his journal entries, he shares his observations of the differing coastlines; the smooth sandy beaches on the eastern leeward side and the rocky, tumultuous cliffs on the west. It’s worth wondering what America’s most famous Founding Father must have been thinking as he gazed out over the crystal blue horizon.

With Barbados being a moderately sized island – just 21 miles long, by 14 miles wide – it’s a wonderful destination to experience first-class history in a relatively short amount of time. There are many resources that document the specifics of Washington’s journey that can help you plan your trip. 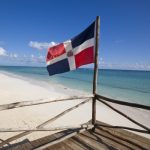 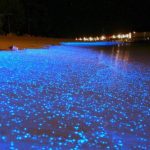